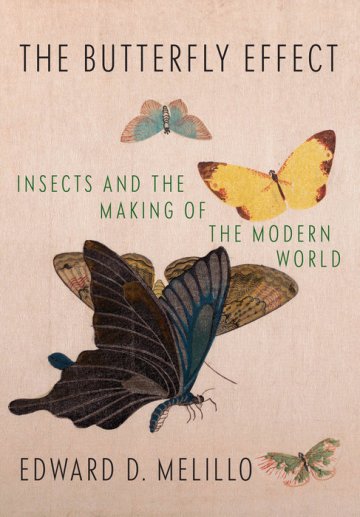 The Butterfly Effect Insects and the Making of the Modern World
Edward Melillo
Knopf/August, 2020

A fascinating, entertaining dive into the long-standing relationship between humans and insects, revealing the surprising ways we depend on these tiny, six-legged creatures.

Insects might make us shudder in disgust, but they are also responsible for many of the things we take for granted in our daily lives. When we bite into a shiny apple, listen to the resonant notes of a violin, get dressed, receive a dental implant, or get a manicure, we are the beneficiaries of a vast army of insects. Try as we might to replicate their raw material (silk, shellac, and cochineal, for instance), our artificial substitutes have proven subpar at best, and at worst toxic, ensuring our interdependence with the insect world for the foreseeable future.

Drawing on research in laboratory science, agriculture, fashion, and international cuisine, Edward D. Melillo weaves a vibrant world history that illustrates the inextricable and fascinating bonds between humans and insects. Across time, we have not only coexisted with these creatures but have relied on them for, among other things, the key discoveries of modern medical science and the future of the world's food supply. Without insects, entire sectors of global industry would grind to a halt and essential features of modern life would disappear. Here is a beguiling appreciation of the ways in which these creatures have altered--and continue to shape--the very framework of our existence.

EDWARD D. MELILLO is professor of history and environmental studies at Amherst College. He is the author of Strangers on Familiar Soil: Rediscovering the Chile-California Connection (2015), which won the Western History Association's 2016 Caughey Prize for the most distinguished book on the American West. He was awarded the Mellon New Directions Fellowship in 2017. He received his PhD and his MPhil from Yale University and his BA from Swarthmore College. He grew up in Falmouth, Massachusetts, and now lives in South Hadley, Massachusetts.